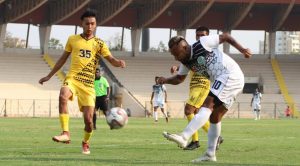 Mohammedan Sporting Club, despite playing with 10-men, put on a valiant effort but end of the day it was not enough as Hyderabad FC Reserves walked out victorious 1-2 in their Second Division League encounter on Wednesday at the GMC Balayogi Athletics Stadium in Gachibowli, Hyderabad.

Mohammedan Sporting looked sharp from the outset pressing high and controlling possession with their quick and accurate passing game inside Hyderabad FC’s half.

Vanlalbiaa Chhangte was particularly impressive both on the wing and inside the box as the Black Panthers have set up camp in front of their opponents’ goal reducing Hyderabad FC’s options to a few counter attacking attempts.

Albeit displaying plenty of technical ability with eye-catching combination plays the Mohammedan Sporting strikers were guilty of straying offside on several occasions.

Hyderabad looked to catch Mohammedan Sporting on the counter-attack, but poor finishing proved to be their downfall as they wasted a number of good opportunities to break the deadlock.

While Hyderabad FC laboured in search of their feet, Mohammedan Sporting established a comfortable rhythm whenever they found themselves in possession making it tough for their opponents to impose their game.

It was a positive and spirited performance of Mohammedan Sporting in the first-half, which fully deserved at least one goal. Half-time, however, arrived with the score remaining goalless.

Following a scoreless opening half which failed to produce a clear goal-scoring opportunity, the hosts showed far more urgency and took the lead in the 50th minute when Abhishek made a smart run in behind the Mohammedan Sporting back four to slot past a helpless Priyant Singh from close range.

While the goal buoyed Hyderabad FC to continue pushing high into the Mohammedan Sporting final third, the early wake-up knocked their opponents into action as Mohammedan Sporting restored the parity in the 71st minute when Tirthankar Sarkar curled a 25-yard free kick into the top corner of Vishal’s net.

The equalizer signalled a lift in intensity from the Black Panthers, who made several decent attacks with Chhangte, Chidi and Sanjib testing Vishal, however, things took a unexpected turn for the Black Panthers when Shafiul Rahman got a straight red in the 73rd minute after he fouled Jacob Vanlalhimpuia from behind.

Thereafter, Hyderabad FC used their numerical advantage to launch relentless attack and the number of shots they had increased however Priyant covered his area well to keep some stunning strikes at bay.

However despite his best efforts Priyant could not hold Hyderabad FC’s advances off forever and as the clock headed into the 89th minute mark Khongsit nodded in a cross from Gani Ahmed Nigam to put his side ahead.

Mohammedan Sporting, to their credit, never gave up but it appeared as if getting on the scoresheet just wasn’t to be for the side today with every shot went anywhere but on target as Hyderabad FC held on for a narrow win.

Despite the loss the Black Panthers still leading the Group B table with nine points from four matches and will travel to Chennai to face Chennaiyin FC Reserves next on March 2.

Previous Manchester United’s #ILOVEUnited returns to Delhi!
Next Away goals rule to apply in the ISL 2019/20 semifinals! 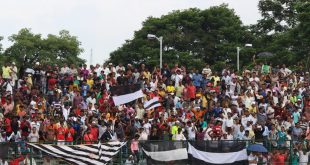