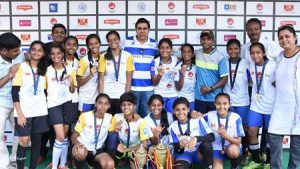 The event saw over 6,600 children participate with over 76% of them coming from under privileged backgrounds. Last year’s event, which was delivered in association with QPR, saw 6,643 children aged between 6 to 16 years from South Mumbai Schools participate in one of Mumbai’s biggest football tournaments.

The event ran over three months and had both boys and girls competing across nine different categories, providing an array of winners from local South Mumbai schools.

2,064 girls competed in the tournament, making up 31.06% of the total participants. As well as being able to play under the watchful eye of professional coaches, each participant received a t-shirt and a pair of shorts that featured a QPR logo to help them look and feel the part.

Andy Evans, CEO of QPR in the Community Trust, expressed his pride at the success of the event.

“Social inclusion is a vital ingredient of what has been a successful scheme for the last 10 years and this is the only mass participation football event in India to include state schools and private schools.”

“Football motivates, inspires and connects people across a wide area of the community to deliver positive outcomes to people’s lives.”

“It’s clear to see that with such a huge population in India the potential for football to grow is enormous, and we are delighted to be involved in the further development of the game here.”