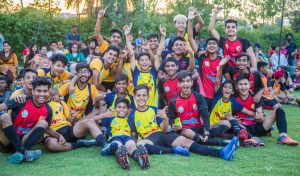 The third season of the Chandigarh Youth League entered the 12th and final day of this edition of the league with finals across all categories.

St Stephens faced and defeated Dikshanth in the Under-8 category by a 3-0 scoreline. The goals were scored by Shiven and Shiraj for St Stephens.

The U-10 finals was played between St Stephens 2 and Velocity A with the winner scored for Velocity A by Satyam to lift the title.

Vivek FC 1 suffered a 0-1 loss to SSFA in the Under-12 category. The scorer was Vyas.

ATM FC faced Soldiers in the U-14 category final and the match went to penalties. ATM FC won the penalties to win the CYL U-14 title.

The teams Atm FC and Doaba FC were the finalists in the U-16 category. The match went to penalties and ATM FC won the title.

In the open category MPS and Soldiers FC were the finalists with Jagdish scored the winner for MPS to lift the title.