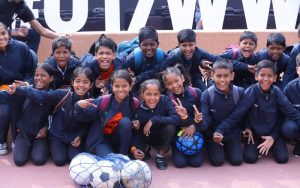 The Local Organising Committee of the 2020 FIFA U-17 Women’s World Cup – India launched ‘Football for All’ in the capital earlier today.

More than 300 kids from NGOs, football academies and schools participated in the ‘Kick Off The Dream’ football carnival and took part in the various activities at Jawaharlal Nehru Stadium in New Delhi.

The highlight of the day was the 5v5 football challenge which saw eight teams participating, and My Angel Academy winning the knockout tournament in style.

“By hosting the FIFA U-17 Women’s World Cup, we want to encourage more kids, especially girls, to take up the beautiful game of football. For that, we need to change mindsets about the possibility of playing sports professionally. Even simple things like sharing trivia about women’s football with the children can be a way to tell them these impressive and unheard stories that can make an impact. The idea behind hosting these carnivals is for kids to come and enjoy the game, learn about women’s football, and have fun,” said Roma Khanna, Tournament Director of the LOC.

2020 FIFA U-17 Women’s World Cup – India also aims to use football as a tool for equality and inclusion. With that in mind, the carnival also saw UN Women conduct a game that was aimed at educating the young crowd about generational equality.

The participants were posed with the choice of kicking the ball towards one of the two messages on two goals. For example, one displayed a message of ‘girls don’t like sports’, and another that had ‘girls can choose to like/dislike whatever they please’. Similarly, themed messages were displayed at different times, and the choice was posed to the children to understand and learn holistically about the idea of equality.

Kick Off The Dream football carnivals are scheduled to be held across the country. 2020 FIFA U-17 Women’s World Cup – India will take place between November 2 to 21.