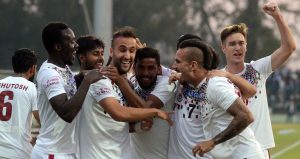 The I-League 2019-20 season is fast approaching its business end and like every edition it has seen some terrific contests and sublime display of skills so far — highlighting how there has been a significant progression over the way the ‘Beautiful Game’ is played in India.

The fire of competitiveness is well and truly burning, but at the same time the ‘Beautiful’ aspect of the sport has come to the fore on numerous occasions as well.

A case in point is the third goal scored by high-flying Mohun Bagan against Churchill Brothers in Goa which featured a total of 23 successive passes across the length and breadth of the pitch before Komron Tursonov slammed the ball home to end the exquisite move on the perfect note.

The Mariners have been chief proponents of playing it beautifully with a whopping 32 points in 13 matches as well as an 11-game unbeaten run to their name.

A significant reason behind their success has been Spanish head coach Kibu Vicuna who has brought in the exciting brand of football. He stated that he is trying to create their “own model” of play in India.

“It was a good goal and it is an important source of satisfaction for the entire coaching staff to see that all the aspects you have been working in the training sessions happen in the matches,” Kibu expressed.

“Since we arrived in India we have tried to create our own model with our style of football. The team is playing good football according to this style but we know that we can play better and in every training session, we are training accordingly,” he said.

According to League CEO Sunando Dhar there has been a marked change in the style of football the teams have played across the seasons and has helped “enhance the quality of football” in India.

“With each passing season the teams have started to play in a style where they have looked to keep the ball, build attacks from the back — right from the goalkeeper — and keep the ball on the ground,” Dhar said. “It only makes the game more attractive and enjoyable for the fans. I also think it’s the right way to play the Beautiful Game. This has really enhanced the quality of football in the country,” he said.