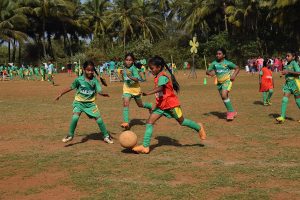 Amidst a colourful and electric atmosphere, the 6th edition of Salgaocar FC’s annual Community Outreach Program came to a close at the Chicalim Panchayat Ground on Sunday, March 10 with their Grassroots Football Festival for children enrolled in the program and their parents.

Speaking on the occasion, Swati Salgaocar, Vice-President – Youth Development said that “Salgaocar FC’s commitment to developing football at a grassroots level has remained unwavering in the uncertain economic situation in Goa and lack of clarity on the way forward for football in India. This would not have been possible without the support and involvement of the local community.”

The festival began with the children playing small sided games. Various football related fun games were organised for the parents as well. The games concluded with fun football matches between the parents and the coaches, volunteers and older children.

Medals and mementos were handed over to the volunteers and coaches of the Community Outreach Program for their voluntary service. Prizes were also given to the winners of the games organized at the festival.

The evening concluded with words of appreciation from the parents and young footballers.

Recognised by the AIFF and AFC for having one of the best Youth Development Programs in the country, the Club continues to set the benchmark in Grassroots and Youth Development initiatives in India. At Salgaocar FC, encouraging and promoting young Goan talent and engaging with the community at large has always been essential to the club’s philosophy.

Since its first edition in 2013, the program has been a roaring success with the number of boys and girls increasing significantly every year. Held every Sunday between October 2018 and March 2019, this year the program saw the registration cross 500 children from in and around Vasco.

The children head to the ground, every Sunday, proudly wearing a full Salgaocar FC kit, for an afternoon of learning and excitement. Divided into two batches of 6-8 years and 9-11 years, they are trained under the watchful eyes of highly qualified and experienced Salgaocar FC coaches. A total of 40 licensed coaches and volunteers were involved in the program this year. Youngsters are taught the basics of football through fun drills and games while the older children learn more challenging skills & tactics for competitive play. The most promising players from the program are absorbed into the Club’s U-13 youth team.

This year also saw the introduction of Baby Leagues for children in the 8 and 10 year age group. Around 90 children participated in 40 matches between November and March.