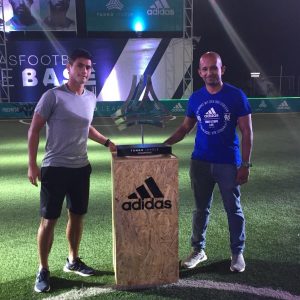 In a bid to promote and nurture grassroots football in the country, German sportswear ginats adidas has brought the Tango League, a five-a-side event, to India.

Under the Tango League experience, adidas will host a series of tournaments, with each tournament comprising of 32 teams and players between 16 to 25 years. From Delhi, the league will further move to Mumbai and Bengaluru in the coming seasons, the organisers said.

Commenting on the development, Indian international midfielder Eugeneson Lyngdoh said, “This is an excellent initiative taken once again by adidas to bring in the Tango League to India.”

“It is an extremely popular concept across the leading football playing nations and is an ideal platform for young footballers to showcase their skills and get recognised.”

“I am excitedly looking forward to some great football, and would want to shout out to all passionate young footballers in India to explore this opportunity and participate in the adidas Tango League,” Eugeneson added.

After the success of the Tango League by adidas concept around the world, it now comes to India and who knows, maybe an Indian footballer will in the future be a part of Tango FC.