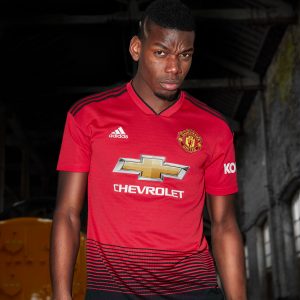 adidas has revealed the Manchester United home kit for the 2018/19 season. The latest jersey marks 140 years since the club was founded, with a train track graphic referencing United’s original name; Newton Heath (Lancashire and Yorkshire Railway) Cricket and Football Club.

The kit will be worn on the pitch for the first time during Manchester United’s summer tour in the United States.

The team was originally formed in 1878 by the Carriage and Waggon department of the Lancashire and Yorkshire Railway depot at Newton Heath and initially played games against other departments and rail companies at their home ground at North Road, Manchester.

In 1892, the club entered the English First Division – the highest league in the country at the time, before changing its name to the now world-renowned Manchester United in 1902, and moving to the iconic stadium of Old Trafford in 1910.

Rich structured engineered shell fabric is brought to life in a black to red fading on the shirt, and is accompanied by black shorts and red and black socks. Alongside the replica jersey, there are also shirts specifically for children and women.

Richard Arnold, Group Managing Director of Manchester United, said, “There are many great moments in this club’s fantastic history, and none more so important than the year the club was founded, back in 1878. This shirt from adidas pays homage to the year we were founded, and marks 140 years of footballing success.”

“The train track graphic on the shirt is a reference to the origins of the club, when the team was known as Newton Heath (Lancashire and Yorkshire Railway) Cricket and Football Club. Again, adidas has shown how innovative they are with their designs – taking a moment from the past and reshaping it for supporters into a jersey which I am sure the fans will love.”

Iñigo Turner, Design Director at adidas, said, “The new shirt for Manchester United mixes the heritage and history of the club’s illustrious past, with modern technology and design innovation from adidas.”

“When designing the kit, we wanted to tell the story of the first incarnation of the United kit, 140 years ago. Originally, the team wore dark shorts, and we’ve reinterpreted this story in a bold and contemporary way, connecting the past to the future, and combining the very best in performance with street wearability.”