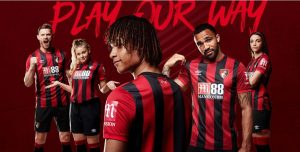 It’s ‘kit launch season’ once again and UMBRO have offered a modern twist on the Cherries’ classic striped style to kick things off.

So what’s new for the 2019/20 season? For starters, the home shirt features a diagonal patterned fabric throughout, inspired by the detail within the club’s iconic Dickie Dowsett crest, as well as two differing shades of red. the sleeves of the shirt are red, whilst the rear neckline of the shirt carries the ‘AFCB’ abbreviation, this time printed in white. Finally, both shorts and socks are black with red trim and feature the stylized ‘AFCB’ lettering again which appears on the rear of the socks.

The new kit was worn by the Cherries squad for the first time during last weekend’s English Premier League game against Tottenham Hotspur at the Vitality Stadium.