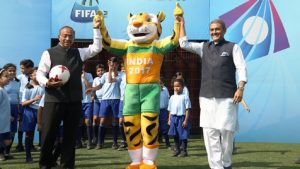 The All India Football Federation in association with the Government of India will host a Mission XI Million mega football festival in Ahmadabad, Gujarat on April 8 at 5:30 pm.

An initiative taken by President AIFF and Chairman of the LOC for the 2017 FIFA U-17 World Cup India, Praful Patel, the event will see local schools from the city of Ahmedabad present at the festival. They will engage in a variety of activities including exhibition games. The students will get an opportunity to show off the skills they have learned through the Mission XI Million programme at their schools, and will later be felicitated.

Speaking about the novelty football festival, Praful Patel said, “What we are trying to do with Mission XI Million would pave a new path for Indian Football. I am confident that the legacy created by the 2017 FIFA U-17 World Cup and this school contact programme will be everlasting. The efforts of our Hon’ble Minister of State for Sports, Mr Vijay Goel and youth icons like Mr Abhishek Bachchan, Hrithik Roshan and Bhaichung Bhutia will only spur kids to engage in the beautiful game.”

An AIFF and Indian government product, Mission XI Million aims at getting at least 11 million children in contact with the beautiful game of football, leading up to the 2017 FIFA U-17 World Cup which will be held in India. The programme signifies the efforts of AIFF and the government to bring football closer to children and ensure it’s development.