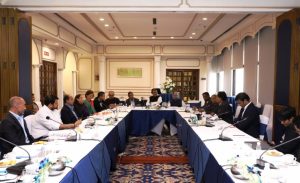 The Committee maintained a minute’s silence for the sad demise of Amarendra Sharan and Anjan Mitra.

Meanwhile, the Committee congratulated the Indian Senior Women’s Team for winning the Gold medal in the SAG Games in Nepal, and Gurpreet Singh Sandhu for winning the Arjuna Award, drawing a spontaneous applause from all members.

“We still have a lot of work to do and a ground to cover,” Mr. Patel mentioned in his opening address. “The preparation for the FIFA U-17 Women’s World Cup India 2020 is in full swing, and the girls are training under new Head Coach Thomas Dennerby.”

“108 clubs across 14 states have shown interest to play in the Indian Women’s League. The aim is to increase the matches,” Mr. Dhar added.

“The Second Division League will see 20 teams participating. It will kick-off in January, and continue till May with a break in between for the Santosh Trophy,” he further informed.

“Furthermore, in coordination with the Ministry for Sports and Youth Affairs, the Khelo India U-17 Girls League is currently on at the moment, all as part of our effort to find talented players for the FIFA U-17 Women’s World Cup India 2020. We also aim to touch 30000 players across 21 states in the Golden Baby Leagues, and emphasis is being laid on getting girls introduced to the sport.”

The Committee unanimously decided to launch the Futsal Club Championship from the 2020 season.

The Committee also decided to launch a AIFF Football Masters Course from mid 2020, procedure for admissions for the initial batch would be advertised soon.

The AIFF Annual General Body Meeting will be held on January 13, 2020.