AIFF gives Young Monks in Leh a taste of the beautiful game!

Press Release 2018-12-03 General Comments Off on AIFF gives Young Monks in Leh a taste of the beautiful game! 507 Views 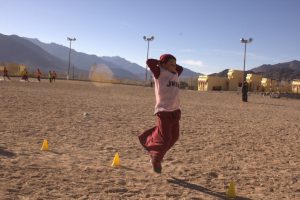 The All India Football Federation (AIFF) in collaboration with the Jammu and Kashmir Football Association (JKFA), organised a first-ever Grassroots Leaders course in the Leh region in October this year, following which a baby league in four different age categories were also started.

Children from a number of schools and walks of life have taken part in the ongoing initiative, with perhaps the most fascinating development being the participation of young Buddhist monks, who reside and study in monasteries in the region.

Two teams representing their institutions have been playing the baby league – one of them being monks from the Spituk Gompa, a Buddhist monastery founded in the 11th century, which is one of the most iconic landmarks in the high-altitude region of Leh, and immensely popular among devotees and tourists alike for its rich history as well as the picturesque scenery.

The league is being operated and monitored by the Leh District FA.

“The football fever has caught on with the kids in the monastery,” says Mr. Ranjit, who is a Hindi teacher at the Spituk Monastery school and also manages their Football team. “The young ones have always had an interest in the sport and with this initiative, they can fuel their passion, express themselves and also get a better understanding of the game,” he added.

The children, who range from ages 6-12, have made Football a feature of their daily routine in school. “They wake up at 6 in the morning for prayers and then after getting ready, they attend their classes. During the lunch break, we encourage them to engage in physical activity and most of them can be seen kicking a football about,” explained Ranjit.

On weekends, the young monks take their passion for the beautiful game a notch higher. Ranjit added: “On Saturdays and Sundays, once they are done with their homework and prayers, the children play football outside. Even during the FIFA World Cup, they watched quite a few matches on TV.”

The baby leagues and the school will take a break for the winter, during which the monks will return to their homes. “These children come from remote corners of the state such as Zanskar, Nubra, etc, and each of them has a different background. But when all of them come together on the pitch, they are united and the unbridled joy on their faces is a delight to watch,” Ranjit informed.