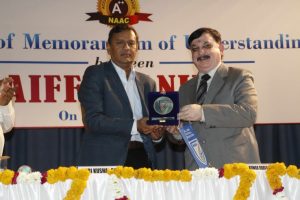 A memorandum of understanding (MOU) was signed between the All India Football Federation (AIFF) and Lakshmibhai National Institute of Physical Education, Gwalior (LNIPE) on March 19, 2019, for the development of football in general. The MOU was signed by the General Secretary of AIFF Kushal Das on behalf of the Federation and by Prof. Dilip Kumar Dureha, Vice Chancellor of the University on behalf of LNIPE, Gwalior.

The facilities available at the Institute would be used for the development of referees, coaches and players as the Institute houses facilities ranging from rehabilitation centres to astro turfs and multipurpose courts.

In his brief address Kushal Das, General Secretary thanked LNIPE for the support to AIFF. He said, “I was really impressed with the infrastructure and facilities provided. The AIFF in association with LNIPE would largely contribute to the development of Indian football ranging from the referees to coaches.”

The facilities at LNIPE were already being used by the AIFF’s referee for quite some time and now the same had been formalized into an MOU which will see not only the referees, but coaches and players also train at LNIPE.