AIFF to conduct trial sessions for boys & girls in Dubai! 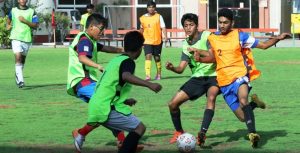 In an effort to discover more Indian overseas talents, the All India Football Federation will conduct a couple of trial sessions in Dubai from June 18-21, 2019. Players possessing a valid Indian passport are entitled to take part in the trials which will be conducted at the Gems Modern Academy, Nad Al Sheba in Dubai, UAE.

The reporting schedule for the groups stay as follows:

AIFF general secretary Kushal Das thanked Navdeep Suri, Ambassador of India to the UAE for taking a personal interest, and inviting the AIFF to conduct the trials.

“The trails for girls in the stipulated age-bracket for the 2020 FIFA U-17 Women’s World Cup – India is a significant aspect which makes these trials stand out. It is a grand opportunity for Indian girls in UAE to get invited into the World Cup team,” Mr. Das said.

Mr. Yadav informed that “some Indian academies in UAE are doing a great work at the YDP level, and it will be nice to have a look at the talent on display.”

“We have spotted encouraging talents in our past two trials in Dubai, and several players have attended India National Team camps. Some Indian clubs also have shown interest in these players. Indian players in the UAE have attributes that can be further sharpened in National team camps. It is also an indication that Indian academies in the UAE are doing some good work with the youth level,” he stated.

“In the next 18 months, National Teams across all categories will undergo various important international campaigns apart from the U-17 FIFA Women’s World Cup 2020. The door for the National Team is always open for a deserving player,” he added.

The registration form can be downloaded at http://bit.ly/AIFFDubaiTrials