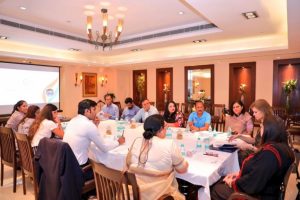 The All India Football Federation’s Women’s Football Committee met in the Capital on July 9 and was chaired by Sara Pilot in attendance of Director of National Teams Abhishek Yadav, I-League CEO Sunando Dhar and AIFF officials.

The committee was briefed about the women activities which took place in the 2018-19 season, including the Women National Football Championships, AFC Women’s Football Day, Indian Women’s League, and the performance of the Women National Teams (age groups and senior). Members were also apprised about the fact that the senior women’s team played more than 20 matches before their participation in the second round of the Olympic Qualifiers, followed by an impressive performance of the team in the second round.

Discussions were carried forward from women’s activities to the baby league, emphasizing on the organization of the league for girls through the support of IWL clubs. The Committee also welcomed Madhurimaraje M. Chhatrapati, who is a newly appointed member. She gave an insight on how the women’s football is developing in Kolhapur.