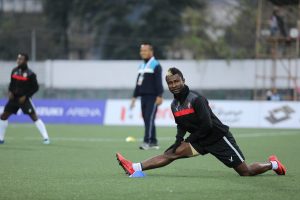 Gokulam Kerala FC take on former champions Aizawl FC on Saturday, December 29 at the Rajiv Gandhi stadium in the Mizoram capital, in a clash between two teams who are desperately searching for a victory. The game is scheduled for a 2pm IST start.

The visitors will be reeling from their previous game defeat to the youngsters from Indian Arrows after promising much early on. They have 10 points from nine games and a win on Saturday will surely resurrect their title chances.

For hosts Aizawl FC, it has been a season to forget under the tutelage of coach Gift Raikhan. They have just one victory and are 10th out of 11 teams currently with six points from nine games.

Gift Raikhan underscored the importance of Saturday’s game in the pre-match presser, saying, “Tomorrow is a very very important match for us as both of us will be playing our tenth match. We have a new international player from Uganda named Richard. Alfred Jaryan will be playing in midfield for tomorrow’s match. Mapuia is back and will be playing tomorrow. We will look to collect three points.”

Gokulam Kerala FC’s problems have stemmed from their backline which has conceded 12 goals so far, so while they have scored 11 times, it has been largely neutralised by an insipid defence.

Coach Bino might want to ensure that some of his local players, who showed spark in the initial stages get proper game time. So the likes of Rajesh, Suhair and Arjun Jairaj getting proper 90 minutes will surely be in his mind.

Speaking at the pre-match media conference, Bino said, “We have learnt some lessons from our last matches that we have lost. We don’t have a striker like Antonio German who left us just before the East Bengal match. We have a new player from Joel Sunday who has just joined us and we hope that he scores for us. Having said that, Aizawl has been playing well lately.”

While Aizawl FC’s defence is inexperienced and a definite problem area, Gift Raikhan has, like his Gokulam counterpart, tried many in midfield and attack, but would have liked to have them settled at this stage of the league.

All in all, it will surely be a game of high intensity, given both teams have lots riding on it with the league almost half over.

Previous India’s Pronay Halder: The target is to get out of the group!
Next UEFA and FIFPro condemn racist abuse in Italy’s Serie A!