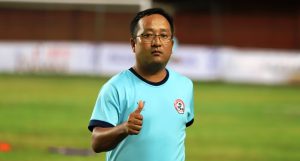 Aizawl FC stole the show in the 2016-17 edition of the I-League when they stunned the entire field to clinch the title. A key member in their journey so far has been team manager Hmingthana Zadeng, who has donned multiple roles since joining the side in 2011, and looked back at the campaign where they became the Champions of India.

He said, “The 2016-17 season was an amazing experience. To be honest, at the start of the season, we never thought that we could go on and become champions. It was only when we had 3-4 matches left that we said to the boys that ‘Yes, we can win’. The players did really well and I’m grateful to God that we won the trophy.”

Ming, as he is often referred to, mentioned that the key factor for them that season was having a base of experienced and talented local players that season. He said, “Actually, that year we had really good local players along with the foreigners, to be frank. So many of them were there — like Lalram Chullova, Lalruatthara, Laldanmawia Ralte, Zohmingliana Ralte, Albert Zohmingmawia, William Lalnunfela, Brandon Vanlalremdika, etc.”

One of the standout features of Aizawl FC over the years is the club’s policy of focussing on their youth setup and giving young talent from the state of Mizoram and even beyond a chance to rise through the ranks and make a name for themselves at the top level.

“We have to promote the young boys, especially from the academy, and have a strong setup for all age groups. This year, nine boys who played in the Hero Elite League last season have been promoted to the senior team for the Hero I-League. Every season we promote a few, at least two or three. Sometimes, they may not have a chance to play but they get to train with and learn from experienced professionals around them, which can go a long way in their development,” he explained.

A former footballer himself, Ming has been working continuously in the sport in his home state and has now completed almost a decade with Aizawl FC, where he has even played the role of the head coach and technical director in the past. Taking a walk down memory lane, he said, “I used to play football in the top division in Mizoram till 2002. After that, I ran my business in the state.”

“Along with a few friends, it was always an objective for us to work and form a team from Mizoram that can play in the I-League. In 2010, I worked with a local club Dinthar FC, who would go on to win the inaugural edition of the MPL (Mizoram Premier League). Then in 2011, I joined Aizawl FC and it has been a roller coaster ride since then,” he recollected with a smile.

The club is in their fifth consecutive season in the I-League and looking back at his journey with the Reds, Ming termed the feat as a ‘great achievement’ for the team. “The journey has been nothing short of amazing — one filled with ups and downs. There have been tough times in the past but our passion and love for football have kept us going. It’s a great achievement for us to have played five straight seasons in the I-League now,” he stated.

He added, “It has been amazing to work with so many good coaches over the years, such as Stanley Rozario, Khalid Jamil, Santosh Kashyap, and some foreigners as well. I have learnt so much from them and from the players and my fellow managers in other I-League teams. I have so many friends now across the country!”

Thanks to its emergence and subsequent rise, Aizawl FC has played a major role in the development of football as a whole in Mizoram and with a number of players from the football-crazy state now plying their trades for clubs across the country and in the Indian national teams across various age groups.

Ming stressed on the importance of continuing the hard work and said that he hopes to see more Mizo players in action in the coming years. “Football in Mizoram has grown a lot and we have many players playing in different clubs and even national teams. We have to keep working hard and hopefully, we will have more Mizo players entering the starting XIs as well. There are a lot of young players coming up and I hope for another good generation to come through,” he said, signing off.