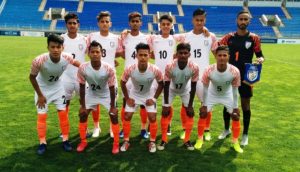 Akash Mishra’s perfectly-placed header earned India a well-fought 1-1 draw against Bulgaria in the last match of the group phase in the Granatkin Memorial Tournament at the Petrrovsky Stadium today, June 9. In the process, India finished the group with one point from three matches. They will now play two play-off matches to decide the final standings.

Coach Floyd Pinto gave Sumit Rathi his first start of the tournament replacing Jitendra Singh as the central defender besides bringing Sanjeev Stalin back to the starting eleven once again after the first game at the expense of Vikram Partap Singh.

India could not have expected to concede an own goal so early but Muhammed Rafi’s mistimed clearance went inside giving the European outfit a seventh minute lead.

India tried to build up the game from the midfield but the resilient Bulgarian defenders averted every danger that came their way.

Bulgaria pushed India further trying to increase the lead but Detelinov’s side-footer missed the target by a whisker in the 33th minute. At the stroke of the first half, Bulgaria could have breached Prabhsukhan Gill again but Filip’s shot flew over the crossbar.

After the changeover, India came out all guns blazing and took only three minutes to find the deadlock. Sanjeev’s curling corner-kick was subtly headed home by defender Akash Mishra towards the near post. The Bulgarian goalkeeper Nikolov Viktor came off his position leaving the near post open and Akash didn’t do any mistake converting it.

Since scoring the first goal, Pinto’s boys were lurking in their quest to hurl the Lions again but Bulgaria stood tall to keep on frustrating their counterparts. Sanjeev also tried his luck from a distance but Viktor punches it away. On the rebound, Rohit Danu could have dealt with it in a better way but the youngster ended up fouling the opponent goalkeeper.

Five minutes to the final whistle, Harmanpreet, on a counter-attacking move, burst into a sprint but finally, jammed the ball into Viktor’s gloves to let the opportunity go.

After the final matches of Group B and C get over tomorrow, India will come to know their respective opponent of the play-off match which is scheduled on Tuesday, June 11.