All square between Mizoram Police and Chhinga Veng FC in MPL-8! 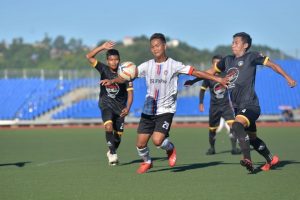 Chhinga Veng FC and Mizoram Police kicked off a re-arranged round 12 fixture today at the Rajiv Gandhi Stadium in Aizawl with a 1-1 draw.

The change in venue for round 12 did little to hinder an exciting match up with Chhinga Veng FC, who had previously beaten their opponents in round 6 at Kolasib, taking the lead on the 5th minute. Current MPL top scorer M.C. Malsawmzuala added to his goal count with a magnificent freekick.

M.C. Malsawmzuala came close to adding more twice in the first half, as he struck the crossbar with a header before puttling the ball inches wide minutes before half-time.

The best chance of the half for Mizoram Police fell to Lalnunsanga who struck the woodwork earlier in the first half.

Mizoram Police improved after the break as they put more pressure on their opponents right from the start. The pressure resulted in an equaliser on the 64th minute when Lalfakzuala finished off a ball from Malsawmfela.

The Police team almost grabbed a late winner only for the heroics of new goalkeeper Dharminder Guru earning a point for Chhinga Veng FC.

Mizoram Police will now face Ramhlun North FC on November 21 at 7pm in Round 13 while Chhinga Veng FC will entertain Electric Veng FC earlier in the evening. A change in schedule due to Aizawl FC’s I-League fixture will now see the first match of round 14 between Chhinga Veng FC and Aizawl FC take place on Monday, November 18.