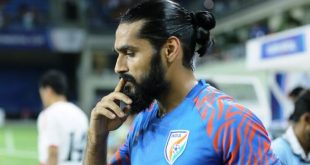 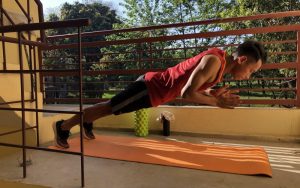 After a roller-coaster season that saw him make his senior India debut and then miss out on almost four months of action due to injury, Amarjit Singh Kiyam had begun the ongoing off-season with a steely determination to work harder than everyone else, and enter the new campaign with a bang.

However, the recent outbreak of the COVID-19 (Coronavirus) pandemic in India and subsequent lockdowns across the nation have meant that he has been unable to return to his home in Thoubal, Manipur so far, and is currently in Chandigarh for over a month.

The current scenario has had an impact on his routine, with neither training on the field nor working out in the gym an option. But does it affect his determination? “No,” replies the gritty midfielder – that too with a smile.

“The goal remains the same. I am determined to work extra hard to cover for the training that I have missed. I have to be in top shape. I know have to keep pushing myself constantly to grow as a player,” he stated.

“I keep myself in shape with stretching exercises which I can do indoors and take care of my body. There are no excuses in football and I know that the efforts I put in now will pay certain dividends in the future,” the 19-year-old who had captained India in the FIFA U-17 World Cup India 2017 affirmed in a chat with the-aiff.com.

A key characteristic of the midfielder’s style of play is his determination — something fans have grown accustomed to seeing on the pitch over the last three years. The former AIFF Academy cadet and Indian Arrows man is well aware of the impact of the global pandemic and referred to the circumstances as “challenging.”

“It is a difficult situation, no doubt. The circumstances are challenging but I hope we will get through them quickly. We are all grateful for the efforts being put in by the frontline workers to keep us safe and all of us must make sure we take the prescribed precautions, adhere to the instructions of the authorities and be understanding.”

Amarjit had arrived in Chandigarh on February 20 after the end of his side Jamshedpur FC’s Hero ISL campaign. He has spent seven years of his footballing journey in the city but this particular visit is a special one for him as his parents accompanied him for the first time.

“I am so glad my parents could come all the way from Manipur. They saw the academy (Chandigarh Football Academy) where I trained, and also met with the staff, parents, coaches. They saw the room I stayed in, how we lived, the pitch we played on. They made so many sacrifices to send me here and it was an emotional moment for us,” he expressed. “It was a surreal feeling.”

Amarjit who has been out of International action since his elbow injury in September 2019, also stays confident of making a comeback to the National side despite the “competitive environment” in the side.

“There is a lot of competition for spots in the National Team. Knowing that I have 10-20 people competing with me for the same positions, it is up to me to work hardest to get the coach’s nod in the starting line-up,” he maintained.

Previous A message from CONCACAF president & general secretary!
Next AIFF condoles the death of Abdul Latif! 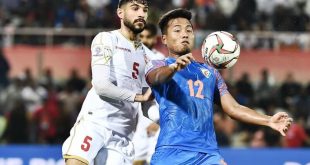