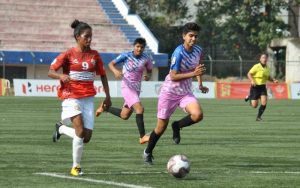 Chances were aplenty, with both sides squandering a catalogue of opportunities. Tanvie Hans and Satyabati Hadia linked up well for Bangalore United FC, while Sreebhumi FC’s Ritu Devi posed a constant threat over the course of the game.

The game sprung to life in the final ten minutes of the match, with both sides earning glorious chances. The best one came to Bangalore United FC in the 83rd minute as a slew of errors in the Sreebhumi FC box saw Bangalore United FC’s Paromita Sit miss a sitter in a 1v1 situation. With the goal gaping, she had a second go but her effort was cleared off the line as the crowd drew a collective gasp.

Both goalkeepers, Vinaya Seshan of Bangalore United FC and Rumpa Malik of Sreebhumi FC had fantastic games as they both kept clean sheets and helped their team earn a point apiece.