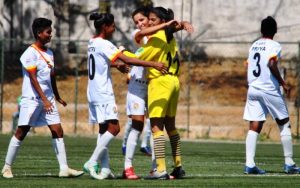 A brace from Satyabati Khadia gave Bangalore United FC a two-goal cushion, but a late strike from Bidesh XI’s Sushmita Jadhav accounted for a nervy finish.

Both sides started on the balance, with the game being dominated mostly in midfield. However, it was Bangalore United FC who drew first blood in the 21st minute. A defence-splitting through ball from skipper Amalya Kamal put Satyabati Khadia through on goal.

Her first touch was heavy, which took the ball past her. Just when the chance seemed to have gone begging with the angle getting tighter, she completely wrong-footed the keeper, who had taken a couple of steps off her line and chipped it over her with deft finesse.

The goal seemed to take some wind off Bidesh XI’s sails, as Bangalore United FC headed into the break with a solitary goal advantage.

In the 59th minute, Bidesh XI goalkeeper Astrid Savia Pereira found herself in a tough spot again. Trying to catch a routine long ball, she made a total hash of it and let it fumble through her hands. Alert to the mistake, Satyabati latched onto the loose ball and rounded it off into an empty net to score her second.

Bidesh XI lacked imagination going forward, but in the 86th minute, a momentary lapse of concentration in the Bangalore United FC defence allowed the chasing pack to pull one back, when Sushmita Jadhav slotted home a rebound, after goalkeeper Vinaya Seshan had initially made a good save.

The strike ensured a nervy ending, but Bangalore United FC held on to walk away with the three points.

Previous Marcus Joseph winner hands Gokulam Kerala FC slender win over Churchill Brothers!
Next Bembem Devi: This Padma Shri is what Women’s Football in India is all about!