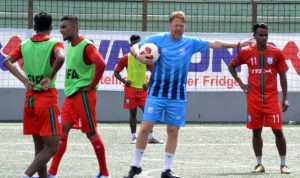 The Bangladesh Football Federation has announced the preliminary squad list ahead of the Asian Qualifiers for the 2022 FIFA World Cup and 2023 AFC Asian Cup.

The players will convene for the camp, which will initially focus on individual training, on August 7 with head coach Jamie Day scheduled to take over mid-August.

Day has added defender Tariq Raihan Kazi, who has played for the Finland U-17 and U-19 teams. He is the second foreign player to join the team after Denmark-born Bangladeshi captain Jamal Bhuyan.

Raihan Kazi, alongside Nazmul Islam Russel, MS Bablu and Sumon Reza, will be aiming to make their national team debuts.

Day will select a squad of 23 players for the resumption of Bangladesh’s Asian Qualifiers Group E campaign, where they are scheduled to face Afghanistan on October 8 and Qatar five days later with a match against India on November 12 and Oman on November 17.

“We’ve added some new players to the squad and are excited to see how they go on,” said Day.

I think we have a good mix of old and young players we selected; so we are looking forward to welcoming them all. Hopefully, It would be a good camp.”