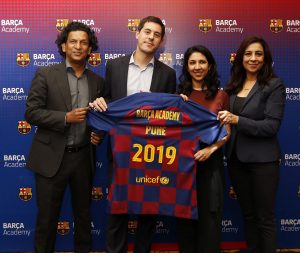 The Barca Academy today announced the launch of four football schools in Pune. The football schools will be starting from January 14, 2020 at Blue Ridge Public School – Hinjewaddi, Don Bosco High School – Viman Nagar, Euro School – Undri and Loyola High School – Aundh. The four permanent bases of the Barca Academy in Pune will be under the supervision of Barca Academy Technical Director Alberto Lafuente Rincon, who will stationed in Pune and will be leading a team of 16 coaches. To provide comprehensive year-long training to young footballers, thrice a week classes will be held in each centre. In the first year, 400 young footballers will be trained across the centres.

Trials for admission to the football schools will be held on November 23/24 and December 13/14 at the respective centres.

Announcing the Pune launch, Carlos Palacin, Head – Barca Academy, APAC, said, “Today, sports and extra-curricular activities have become integral part of a child’s holistic education. If one has to excel in sports, the talent has to be tapped and honed from formative years. The Barca Academy football school is the foundation of creating tomorrow’s footballers. The testament to this is our committed approach in India over the last 8 years. We have built a strong foundation for building tomorrow’s footballers from this great nation of football lovers.”

The launch of Barca Academy in Pune comes at a time when India is preparing to host Barca Academy Asia Pacific Cup 2020 in January 2020. Post the astounding success of the tournament earlier this year, in which 48 teams from six countries participated, India will again be hosting the premier intra-club tournament at Barca Academy, Gurugram from January 30 to February 2.

FC Barcelona was the first major European club to set up base in India in 2011 when they partnered with Conscient Football and held the first FCBEscola Camp in New Delhi. The camp was a big success and since has been a regular feature of the footballing calendar of many top cities in the county including Pune. Encouraged by the huge demand for world-class youth training, FCB and Conscient Football decided to open the first Barca Academy in New Delhi. Many of the players in the FCBCamps and Barca Academy have travelled to Barcelona to participate in the Escola International Tournament, FCBClinics and various other tournaments. Barça Academy India now has the largest offering of all such academies and has trained more than 30,000 players across various formats. In the football schools across Delhi NCR, Mumbai and Bengaluru, there are over 2,000 young footballers who are being trained.

Speaking on the occasion, Anupama Jain, Director Conscient Football, said, “In 2011 when we partnered with FC Barcelona to bring in Barca Academy to India, we were certain that the partnership will change the way the game of football was perceived in the country. We inculcated the Barca philosophy of not about just playing football better, but living the Barca values and building camaraderie. In our journey so far, we have focussed on enhancing not only the standard of the game but have also successfully delivered focussed training programs tailor-made for India, without comprising on Barca quality and values.”

Barca Academy’s training methodology nurtures talent while providing holistic development to the youth. More than just learning to play football, the academy instils in a youngster the Barca values of camaraderie, friendship, trust and loyalty. The program in India mirrors these values and has taken the lead in providing many Value added services like Fitness & Conditioning, Health & Nutrition, Physiotherapy etc. The children and many times even their parents are benefitting greatly form these activities that are learnings for life.

The fact that Barca Academy is one of the best youth development programs in the world, coming from a club that has produced talents like Messi and Iniesta from its own stables, is now bearing fruit in the Indian environment as well. Be it the representation in India’s U-17 World Cup Futsal squad or in Haryana and Delhi Sub-junior a nd Junior State teams or in the Delhi football league representing various clubs the Barca Academy trained players are beginning to make a mark. Barca Academy is the largest football academy in India and has been rated as a top academy by the AIFF.