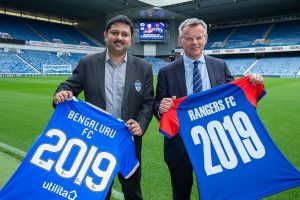 Bengaluru FC have forged a partnership with Scottish giants Glasgow Rangers FC in a two-year collaboration (with the option to extend on mutual agreement) that will present a number of football and commercial opportunities for both clubs, the Indian Super League Champions announced on Friday, September 27.

Founded in 1872 and playing out of the Ibrox Stadium, Rangers have won the league title a staggering 54 times, the Scottish Cup 33 times and the Scottish League Cup 27 times. They also hold the distinction of being the first British club to make the final of a UEFA tournament when they faced Fiorentina in the European Cup Winners’ Cup in 1961. The club is currently managed by Steven Gerrard.

During the length of the link-up, the Light Blues will look to have an active presence in the Indian footballing market enabling the club to grow its international audience. The partnership will also encompass a scouting link up with the Indian Super League side to identify India’s best talent with a view to opening up opportunities.

The Rangers Academy will travel to India and be welcomed at Bengaluru’s state of art training centre. Rangers Soccer Schools will also be holding training camps in Bengaluru and will be bringing tour groups to Glasgow to see how to play and train the Rangers way.

A Rangers Legends side, packed with players who have played for the Gers [as the club is popularly known] in the past will travel to India to play and also to take part in fan engagement events whilst also visiting Soccer Schools camps.

A culture of knowledge sharing will also be fostered, with experiences and opportunities discussed across a number of different departments across both clubs. Rangers will also look to grow into the Indian market by hosting screening events in Bengaluru for fans.

Rangers Managing Director Stewart Robertson said: “We’re excited and proud to announce our partnership with reigning Indian Super League champions Bengaluru FC, especially at this time when football in India, a country of 1.3 billion people, is entering a period of unprecedented growth.

“The Club’s international strategy is a core-pillar to our growth plans and this partnership opens up Rangers to the vast football community in India and provides a great platform for us to engage with our wider fan base, and the South Asian communities at home here in Scotland.”

Speaking at the launch of the partnership, Mandar Tamhane, CEO, Bengaluru FC said, “It is a matter of pride for us to be partnering with Rangers FC – a club that is laden with history and is one of the top football brands globally.”

“The partnership is based on an exchange of knowledge and services, one that we are looking to make the most of. Bengaluru FC’s endeavour has been to help grow Indian football and our association with Rangers is a big step in that direction. We are excited about the development our academy, Soccer Schools and grassroots programmes will be exposed to, in the coming years. There is also the prospect of our first team visiting and playing a game at the Ibrox, which is something we are looking forward to. We are certain of the success of this partnership.”