Bengaluru FC B held to a goalless draw by LoneStar Kashmir FC! 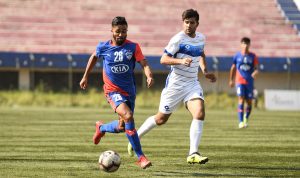 Bengaluru FC B were held to a goalless draw by LoneStar Kashmir FC in a Second Division League encounter at the Bangalore Football Stadium on Friday. The stalemate brought an end to Blue Colts’ four-match winning run in Group A, but Naushad Moosa’s boys stay unbeaten and on top of the group with 13 points from five games.

The Blue Colts began the game aggressively and created more than five close chances in the opening twenty minutes. The closest chances fell for Naorem Roshan Singh, Myron Mendes and Edmund. However, none was as clear as the one that fell for Altamash Sayed in the 12th minute. The playmaker was unmarked and at the end of an inch-perfect ball in from the left by Roshan at the far post. However, Altamash somehow missed the attempt failing to get a clean touch.

LoneStar Kashmir FC struggled to create any real danger for major part of the first half but had a glorious chance right before the break. Duleep Menon found himself clear in the box but his effort from close was saved by Bengaluru FC custodian Patra.

The second half saw both teams struggle in creating clear goal scoring chances. While the Blue Colts saw majority of the possession, LoneStar Kashmir FC sat back, defending deep in their own territory, only pushing ahead on counter attacks.

It was Bengaluru FC who came the closest to breaking the deadlock in the 83rd minute when Altamash unleashed a powerful left-footer but his effort from distance was tipped over by Muhammed Nalakath in the rival goal. The Blues kept the pressure on and pushed up with most players but couldn’t find the breakthrough as the game ended 0-0.

Bengaluru FC B play ARA FC next at the Bangalore Football Stadium on March 20.