Bengaluru FC coach Albert Roca: We have been the best team this season! 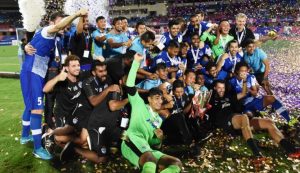 Minutes after winning the inaugural edition of the Super Cup beating East Bengal 4-1 in the final at the Kalinga Stadium in Bhubaneswar, Bengaluru FC coach Alberto Roca said his team “has been the best team in this season at the Indian domestic level.”

“I am very happy for the supporters. This is the success we were looking forward to. Today we showed that my team has been the most consistent team this season,” Roca stated.

“We were a little bit down in the first 20 minutes. They were very aggressive. I also need to congratulate East Bengal for their performance in the season,” he stated. “I am very happy for the way my team performed in the tournament. Three of the games we came from back from a goal down. It’s very credible.”

Referring to the Guard of honour which the Bengaluru FC team gave to the East Bengal players prior to the prize distribution ceremony, Roca stated it was a “manner to show respect” to the “deserving opponents.”

“East Bengal had a very good tournament. They deserved to be in the final and even with 10-men they made it so difficult for us. I understand the supporters of East Bengal may be a bit sad at the moment but they should be proud of them and the manner they played in the tournament.”

“Everybody worked very hard, especially the players. But the result was not in our favour. All the credit goes to the players,” he maintained.

Previous VIDEO – 442oons: Up Direction – Breakthrough of the Bundesliga Boy Band (Parody)!
Next Celebrate the Heritage of the Nike Mercurial with your choice of Iconic Look!