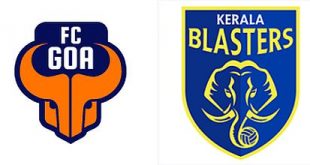 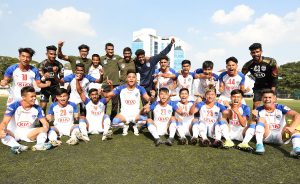 Bengaluru FC’s defense of their BDFA Super Division League title was accomplished with a dominant 3-0 win over Ozone FC in their final game of the campaign at the Bangalore Football Stadium on Saturday. Suresh Singh Wangjam (31′), Edmund Lalrindika (39′) and Ajay Chhetri (74′ pen) found the back of the net as Naushad Moosa’s boys claimed the prestigious George Hoover Trophy for a second season on the trot.

The win was also Bengaluru FC’s eleventh of the campaign as they made it twelve games unbeaten, taking their tally to an unassailable 34 points, a point ahead of Kickstart FC (33 pts) who finished second with a 4-0 win over MEG in the second game of the day.

The Blues began on the offensive from the get go, and had three chances inside the opening seven minutes. The trio of Advait Shinde, Amay Morajkar and Suresh, all came close to breaking the deadlock but were denied by a combination of rival custodian Avijit Debnath and the frame of the goal. 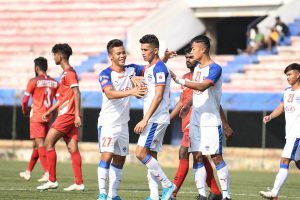 Persistent pressure finally gave results in the 31st minute when a quick counter attack which began in their own box, saw Bengaluru take the lead. Having dealt with Ozone’s dangerous corner, the Blue Colts began a composed attack from the back. Instead of going for the clearance, skipper Sairuat Kima found Biswa Darjee on the run down the left to begin the counter. The defender outmuscled rival attacker Gagandeep Singh before finding Suresh making a run from the half line. The midfielder sprinted into the rival half and made his way past two defenders, and found the bottom corner with a low shot at the far post.

Eight minutes later, Bengaluru FC doubled their advantage, when a good combination play between Edmund and Advait broke open the rival defence. Cutting in from the right, Edmund found Advait down the middle, who in turn chipped a delicate pass into the box back to the striker who continued his run and made no mistake with the finish from close range.

Coming out in the second half with a two-goal cushion, Moosa’s boys controlled the majority of proceedings and dictated the tempo of the game with chances throughout.

In the 76th minute, Ajay sealed the game with a third goal of the afternoon, scoring from the penalty spot after Roshan was brought down in the box by Ozone FC’s Aaron Rodrigues and Sree Higetta. 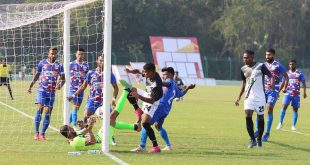