Bengaluru FC Colts down Bengaluru United 2-1 to move atop standings! 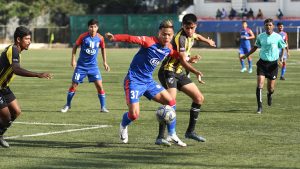 Bengaluru FC made it six wins on the trot with a 2-1 defeat of FC Bengaluru United 2-1 in a high stakes clash in the BDFA Super Division League at the Bangalore Football Stadium on Tuesday, December 24. Naorem Roshan Singh (14′) and Edmund Lalrindika (44′) scored on either side of an Amey Bhatkal (38′) goal for FC Bangalore United as the Blue Colts extended their unbeaten run to nine games in the competition.

The Round-10 win also ensured that Bengaluru FC reclaimed their top spot in the standings, taking their tally to 25 points from ten games.

After a slow start to the first half, Naushad Moosa’s boys began asserting their dominance on the game and after some half chances, they finally took the lead in the 14th minute. A well-crafted team move saw Bengaluru FC open up a rival defence at the quarter hour mark, with four players combining in the opposition half. Ajay Chhetri began the move, playing a long diagonal to the left flank to find Edmund. The striker sent Biswa Darjee clear with a first-time pass, who then squared the ball to Roshan on the run. The winger, who ran onto the ball with a strike, smashed home from the edge of the box to make it 1-0.

With the Colts dominating, it was FC Bengaluru United who levelled things against the run of play in the 38th minute. Picking up a loose ball in midfield, FC Bengaluru United striker Amey Bhatkal managed to dribble past his marker, before getting into the box. Sairuat Kima, in his attempt to dispossess, saw the ball ricochet off the FC Bangalore United striker and head into the Bengaluru FC goal with keeper Aditya Patra left stranded.

Despite the setback, the Blue Colts regained their lead just a minute from the break, capitalising on a quick counter. Roshan gained possession on the left and took the ball down the middle before finding Leon Augustine on the right. The winger raced past his marker before playing it across to Edmund at the far post who made no mistake in slotting it home.

Bengaluru FC Colts controlled majority of the proceedings in the second half and had a great chance to make it 3-1 late on, but with time and space at his mercy, Ajay’s shot went over from close range.

Previous Colin Chambers: Anyone can become a scout as scouting is all about observation!
Next South United FC score 2-0 win over MEG!