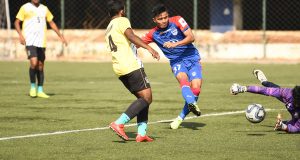 Bengaluru FC Colts cruised to another dominant win as they brushed aside AGORC 7-0 in a one-sided affair at the Bangalore Football Stadium on Friday. Edmund Lalrindika (26′,31′,51′) stole the show with a hattrick while Advait Shinde (25′,63′) bagged a brace alongside goals from Leon Augustine (5′) and Amay Morajkar (69′) in the Blue Colts’ seventh straight win.

The win took Bengaluru FC’s tally to 28 points from 11 games as Naushad Moosa’s boys maintain pole position in the standings with only two rounds to go.

The Colts began offensively and took the lead inside five minutes as Leon sent his header home at the near post, connecting with defender Namgyal Bhutia’s cross from the right. They kept the pressure and then struck in quick succession midway through the half. First it was Advait who tapped home from close range after a well worked set-piece on the right just outside the box, and then a minute later, he set up Edmund with a beautiful through ball and the striker got past his marker before finding the back of the net.

Five minutes later, Edmund got on the score sheet again when he controlled Bhutia’s well-floated cross in from the right at the far post, before finishing off with ease as Bengaluru FC Colts took a four-goal cushion into the breather.

It took six minutes after the restart for Edmund to complete his hat-trick as he tapped home from close after defender Biswa Darjee’s low ball in from left was spilled by the rival custodian in front of the goalmouth.

While the Blue Colts were seeing most of the possession, AGORC opted to stay compact at the back and hold on and pushed up with a rare counter attack. Moosa’s boys however managed to breach their defence twice in the final half an hour. Advait completed his brace when he got Bengaluru FC Colts’ sixth in the 63rd minute tapping home from close. Defender Muhammed Rafi did well to head down Amay’s corner kick in from the left into Advait’s path, and with the attacker being unmarked in front of the goal, he made no mistake in scoring his second of the game.

Amay himself got on the scoresheet in the 69th minute with a beautiful dipping effort from the edge of the box on the left to complete the rout and secured Bengaluru FC Colts’ second biggest win of the competition.

Previous Salgaocar Legends take on Navelim Veterans on December 30!
Next Jamshedpur FC go down fighting against Odisha FC at the Kalinga Stadium!