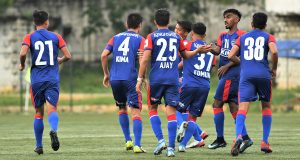 Bengaluru FC secured their first win of the campaign after overcoming Bangalore Eagles 1-0 in a Round 2 encounter of the BDFA Super Division League at the Bangalore Football Stadium on Wednesday. Striker Edmund Lalrindika (49′) netted the only goal of the game, as Naushad Moosa’s boys moved up to 10th in the standings with three points.

The Blues Colts began the game on the offensive in a 4-3-3 formation, with Moosa making one change to the team as defender Muhammed Rafi replaced Robin Yadav. Sairuat Kima, Ajay Chhetri and Aditya Patra joined Edmund as the first team players in the squad.

Despite some early attacks by Bengaluru FC, it was the rivals who created the first close chance of the game in the 5th minute. Sairuat Kima’s weak pass was intercepted by Satish Kumar, and the attacker unleashed a first time effort that keeper Aditya Patra brilliantly tipped over on to the crossbar as the Colts breathed a sigh of relief.

Meanwhile at the other end, Bengaluru FC pushed ahead but with the Eagles playing a high pressing counter attacking game, Moosa’s boys were finding it tough to penetrate through their back line.

The second half began in the same was as the first, with BFC surviving a close chance. It was another defensive error from the Colts’ defense and once again it was Patra who came to the rescue to deny Satish Kumar again in the first minute of the second half.

Despite the shaky start to the second half, the Blue Colts gathered their composure and netted the opener in the 49th minute. Rafi, playing his first game this season, pumped in a long ball from the right flank to find Kima who flicked it on to the far post where an unmarked Edmund headed it home.

Both sides continued to attack each other for the rest of the half, but lack of a killer touch in the final third let them down as the game ended with a solitary goal.

Previous Igor Stimac: I want my India to play without fear against anyone!
Next Paraguayan beer brand Pilsen becomes a National Supporter of the 2019 FIFA Beach Soccer World Cup! 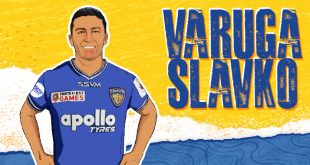