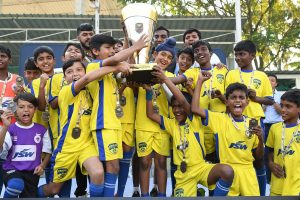 Bengaluru FC’s Academy U-11 side were crowned champions of the Double Pass Development League with a 4-0 win over Bangalore City FC at the Kicks on Grass Arena in Bellandur on Sunday, January 19. Rayuel Beale, Kanishk Ghosh, Nakul S and Sehajvir Singh were on target for the Young Blues, who had finished behind Bangalore City FC in the group stages.

Starting on the front foot, Rajan Mani’s side scored from their very first shot on target, in the 11th minute when Rayuel turned his marker and unleashed a volley that beat the Bangalore City FC custodian at his near post. The goal would hand the Young Blues a lead they would keep into the break.

Bengaluru FC began the second half with renewed vigour and added to their tally in the opening stages once again. Dispossessing an opponent in his own half, Kanishk dribbled past two defenders before slotting home to make it 2-0. Refusing to take their foot off the pedal, Bengaluru FC added to their lead from a set-piece as Sehajvir’s corner was nodded home by Nakul.

Sehajvir, who was named captain for the summit, then turned goalscorer with a strike in the final minutes to end the campaign as the U11s top marksman with 44 goals to his name.

U11 Player of the final: Rayuel Beale

Hyderabad FC release 10 of their players!