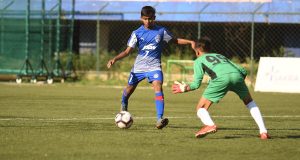 Bengaluru FC recorded their fifth successive win in the Hero Sub-Junior League as they overcame Boca Juniors Football Schools 3-0 in a Round-5 encounter at the Bangalore Football Stadium on Saturday.

In a game completely dominated by the Young Blues, it was a brace from striker Yodhin Rishyak (23′,55′) and a ninth goal of the campaign for attacker Chandan Biju (37′) that handed Rajan Mani’s boys a comfortable win.

The result takes Bengaluru FC’s tally to 15 points from five games as they cement their top position moving six points clear of Boca Juniors Football School who remain second on nine points in Group B of the Bengaluru Zone.