Bengaluru FC gear up for Sub-Junior League final against RFYC! 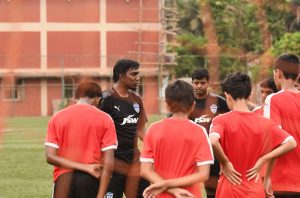 Bengaluru FC’s Sub-Junior side will have a shot at making history when they take on Reliance Foundation Young Champs (RFYC) in the grand finale of the Hero Sub-Junior League at the Don Bosco Ground in Goa on Wednesday. The Young Blues can become the first-ever BFC Academy side to clinch an AIFF Youth League title after an enthralling campaign which has already seen them create history by reaching the final.

The task won’t be an easy one for Rajan Mani’s all-Bengaluru side who will come up against an equally formidable opponent from Navi Mumbai, who boast of players from all over the country. But they can take motivation from a thrilling come-from-behind 2-1 win over a strong Sudeva FC side in the semifinal on Monday.

Speaking on the eve of the big clash, Coach Rajan praised the effort put in by the team so far in the competition. “We have worked very hard as a team to reach at this stage of the competition. We came up against some quality teams and the boys have always given their one hundred percent in every game. In the final however, we will need to give even more because it won’t be an easy tie. We have worked on our game plan and the boys have managed to implement our philosophy and it’s something to be proud of,” said Rajan.

Going into the game, RFYC are currently the top scoring side in the competition with 62 goals, and the Young Blues follow in on third with 47 goals. While the attackers have been scoring freely for either side, they also have been formidable at the back boasting one of the most stubborn defences in the league. RFYC have conceded eight goals keeping six clean sheets, while the Blues have just let in five, keeping seven clean sheets of their own.

Rajan expects a close game and while assessing the opponents, he further added, “We have faced RFYC twice before this season, in friendlies at Coimbatore and Navi Mumbai. While we have beaten them before, we can’t underestimate them or take the game lightly. They are quite an organised team when it comes to their game play and will pose a lot of threat if we are not alert. It’s important for us to stick to our game plan and be prepared for a close affair.”

The game kicks off at the Don Bosco Ground in Goa at 4.30pm tomorrow.