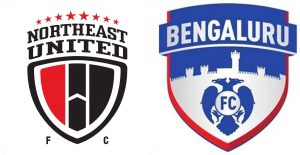 Bengaluru FC are faced with a familiar prospect of having to finish the job at the Fortress after Carles Cuadrat’s men went down 1-2 to NorthEast United FC in the first leg of the Indian Super League semifinal played at the Indira Gandhi Athletic Stadium in Guwahati on Thursday. A late penalty from Juan Mascia (94′) separated the two sides after substitute Xisco Hernandez (81′) had cancelled out Redeem Tlang’s (20′) opener in what was a game of fine margins, leaving the second leg to be played at the Sree Kanteerava Stadium tantalizingly poised.

Cuadrat chose to start the game with new signing Alex Barrera who slotted in as a defensive midfielder in a 4-1-4-1 formation. Albert Serran, having missed the games against FC Goa and Jamshedpur FC, returned to join Juanan Gonzalez in the centre of defence. Miku, while playing the lone striker, had Udanta Singh and Sunil Chhetri in the four-man midfield just behind him.

What seemed like a measured start to the game, changed complexion when Tlang fired NorthEast to the lead in the 20th minute. Picking a pass from Bartholomew Ogbeche who switched play to the right, Tlang took a touch before curling in at the far post with his left.

Bengaluru FC came very close to making amends minutes later when keeper Pawan Kumar spilled the ball in trying to collect Dimas Delgado’s strike from distance, but recovered just in time to beat Miku’s charge to it. The striker had another chance in the 37th minute when he brought down Delgado’s take from the corner, only to sky his shot over.

NorthEast United FC finished the half without Ogbeche and started the second without Rowllin Borges as injuries forced Eelco Schattorie to throw in Mascia and Nikhil Kadam as replacements.

Cuadrat’s first change, meanwhile, was tactical as he brought on Xisco for Serran at the hour mark in a bid to chase that important goal away from home. With Xisco in attack, Bengaluru FC began pushing NorthEast United FC to defend deep. The Blues kept winning set-pieces but struggled to make an aspect of the game that they’re lethal with, count.

With ten minutes left to play, Bengaluru FC found the equalizer with some neat interplay inside the box. Chhetri, fed through inside the area by Miku, feinted once and then again before squaring for an arriving Xisco, who placed the ball past Pawan for his first goal in Bengaluru FC blue.

There was more drama deep into injury time as referee Santosh Kumar pointed to the spot, adjudging Khabra to have brought down substitute Mascia inside the area. The NorthEast United FC striker then sent his penalty past Gurpreet Singh Sandhu to hand the hosts the lead once again, in what would be the final action of the game.

The second-leg of the Indian Super League semifinal between NorthEast United FC and Bengaluru FC will be played at the Sree Kanteerava Stadium on Monday, March 11.