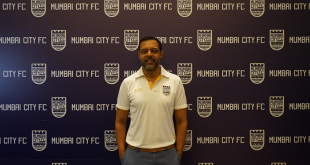 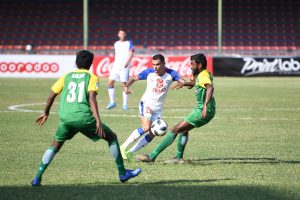 Bengaluru FC saw their AFC Cup qualifying campaign hit a roadblock as Maziya S&RC threw a spanner in the works with a 2-1 win over Cuadrat’s men at the National Stadium in Male on Wednesday. Goals from Ibrahim Mahudhee and Cornelius Stewart on either side of a Nili Perdomo spot-kick gave Marjan Sekulovski’s side the advantage ahead of the second leg.

Cuadrat chopped and changed his eleven yet again as Bengaluru FC began the game with Leon Augustine on the flank, making his first start for the team. With Suresh Wangjam serving a one-game suspension and Sunil Chhetri injured, Semboi Haokip was given the task of leading the line while Ashique Kuruniyan played down the left.

Maziya were dealt an early blow when striker Asadullah Abdullah went down injured and had to be replaced with less than ten minutes on the clock. Maziya had a chance to break the deadlock in the 40th minute when Ibrahim Aisham found himself onside and in possession. The midfielder’s shot, however, sailed high of Gurpreet Singh Sandhu’s frame. Bengaluru FC then had a chance of their own when Perdomo’s strike from distance was parried away by Maziya’s Afghani goalkeeper Ovays Azizi.

Bengaluru FC’s first change saw Udanta Singh replace Augustine, and what was a cagey affair came to life in a matter of minutes in the second period. Bengaluru FC, having thrown bodies forward for a set-piece, saw Paartalu’s header from a resulting long diagonal bounce off the crossbar and out of play. Moments later, Maziya capitalized on a slick passage of play at the other end as Ibrahim Mahudhee picked the ball up in midfield and took a touch, before firing home from distance and past the dive of Gurpreet, handing the hosts the lead.

Cuadrat made his second change of the afternoon just moments later when Deshorn Brown replaced Semboi in attack. Soon after, an infringement on the Jamaican striker prompted the referee to point to the spot. Nili Perdomo stepped up and saw his take inch past the dive of Azizi to bring things level.

However, with humidity among the many factors to battle on the day, tired Bengaluru FC defenders allowed Maziya another shy at goal with ten minutes left to play. Saint Vincent and the Grenadines striker Stewart, having managed to stay onside and find inroads down the middle, slotted his effort past a hapless Gurpreet to give the Maldivian side the lead once again.

Bengaluru FC attacked with intent as Cuadrat sent on Nishu Kumar in place of Parag, but a resolute Maziya defence held off the Blues’ attempts to claim the victory.

The Blues return to Bengaluru next, where an Indian Super League clash against ATK awaits them at the Kanteerava on Saturday, February 22 before the second leg of the AFC Cup playoff round against Maziya at the same venue on Wednesday, February 26.