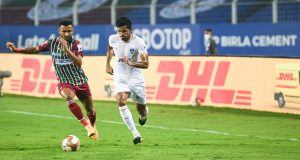 A David Williams stunner in the first half condemned Bengaluru FC to their first defeat this season, as the Blues went down 0-1 to ATK Mohun Bagan at the Fatorda Stadium in Goa on Monday. In a game with few chances to talk about, it was the Australian’s fine finish that gave the champions all points. The defeat kept Bengaluru FC in the third position with 12 points, while ATK Mohun Bagan went level on points with Mumbai City FC at the top.

Cuadrat had spoken about the possibility of rotating his squad for this game at the press conference on Sunday, and sure enough, the Spaniard rang in three changes to the team that took the pitch from the one that started against Odisha FC last week.

Rahul Bheke was back in the team after sitting out the last two matches, slotting in as the left-back. Udanta Singh and Deshorn Brown came in, with Kristian Opseth and Suresh Wangjam dropping to the bench. Emanuel Lalchhanchhuaha and summer signing Ajith Kumar found a place in the matchday squad for the first time this season, with an injured Ashique Kuruniyan and Wungngayam Muirang moving out of the 20-man squad.

Antonio Habas, meanwhile, made one change to the ATK Mohun Bagan side that defeated FC Goa, with Edu Garcia replacing Jayesh Rane.

The game was off to a tight start as both teams looked to take control of proceedings. The Blues, continuing to employ a high line, caught the opposition offside thrice in the opening quarter. It was finally broken in the 16th minute by David Williams, whose lob found Roy Krishna but Juanan stood strong and blocked his shooting angles.

Bengaluru FC had the game’s first shot on target as Gurpreet’s lob in the 19th minute found Erik Paartalu in the box, but the Australian’s header was straight at Arindam Bhattacharja in the ATK Mohun Bagan goal. Gurpreet was called into action three minutes later when Subhasish Bose’s low cross found Manvir Singh and the forward’s shot was straight at the keeper.

The deadlock was broken right after the water break, when Edu Garcia’s crossfield pass found Williams in the 33rd minute. The Australian, at the edge of the box, dropped his shoulder before finding the top corner of the goal to give Habas’ men a lead they would take to the dressing room at half-time.

Watching his side struggle to create any meaningful play, Cuadrat made three changes at the hour mark, bringing in Fran Gonzalez, Leon Augustine and Opseth in place of Erik Paaratlu, Pratik Chaudhari and Brown.

But Bengaluru FC, who have been playing some attractive football coming into this game, looked bereft of ideas and struggled to create anything that would bring them back into the game. The Blues did come close in the 74th minute when Wangjam found Cleiton Silva with a cut-back in the ATK Mohun Bagan box, but the Brazilian’s shot had too many legs to get past.

The Blues are next in action on December 28 when they host Jamshedpur FC at the Fatorda.