Bengaluru FC have night to forget in defeat to Mumbai City FC! 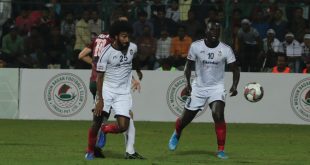 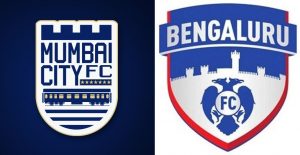 Bengaluru FC’s chase for top spot in the Indian Super League suffered a crucial blow as the Blues went down to Mumbai City FC in a defensive performance to forget at the Mumbai Football Arena on Friday. Modou Sougou (13′) and Amine Chermiti (55′) made the most of blunders at the back to score in either half as Carles Cuadrat’s men stayed put at second place on the table but opened a window of opportunity to the chasing pack in contention for a spot in the playoffs.

Cuadrat named an unchanged eleven from the side that beat Jamshedpur FC a week ago, but had a new face on the bench in Jamaican striker Deshorn Brown who arrived in the country on Tuesday. Mumbai City FC head coach Jorge Costa, meanwhile, had Sourav Das start ahead of Raynier Fernandes, while Diego Carlos replaced a suspended Serge Kevyn on the wings in attack.

While Cuadrat – in his pre-match press conference – had stressed the need for Bengaluru FC to be the team that scores first, it was Mumbai City FC who shot into a 13th-minute lead, and it had to do with a fatal lapse of communication at the back for the Blues. Charging out to collect a cross from Rowllin Borges, Gurpreet Singh Sandhu was beaten to the race by Sougou who snuck in between Juanan Gonzalez and the Bengaluru FC keeper to head into an empty net.

Bengaluru FC’s efforts to claw back into the game and the half were met by stiff resistance from the hosts. And when the Blues did manage to get the ball in the back of the Mumbai City FC net, an officiating blunder denied Chhetri what was a legitimate goal. With seconds to the end of the half, the Bengaluru FC skipper met Dimas Delgado’s chip with a run timed to perfection before slamming his finish past Amrinder Singh at the near post. But the assistant referee at the far end raised his flag for an offside that wasn’t, as the Bengaluru FC bench stood and watched in shock.

Cuadrat started the second half with a change, bringing on Udanta Singh for Manuel Onwu, and soon made a second substitution, throwing in Eugeneson Lyngdoh for Nishu Kumar in a show of intent.

But on an uncharacteristic night of blunders in defence, Bengaluru FC succumbed to a second when Harmanjot Khabra’s weak attempt to head the ball back to Gurpreet in his own box was intercepted by Chermiti who slotted home from close to make it 2-0 in the 55th minute.

Left with no option but to throw everything at Mumbai City FC, Cuadrat handed Brown his debut off the bench, pulling off Khabra. The Blues attacked the flanks and came close on two occasions as Brown’s cross found Chhetri unmarked in the area but the skipper’s glancing header went wide. Moments later, Chhetri’s cross for Udanta saw the winger poke his effort off target once again on a night the Blues will look to forget.

Bengaluru FC face Odisha FC at the Kanteerava Stadium in their next match on January 22.