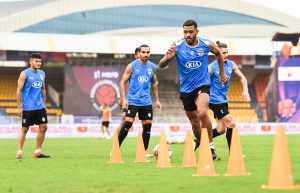 Bengaluru FC will look to keep their perfect start to January going, when they take on Mumbai City FC in a crucial fixture for both sides at the Mumbai Football Arena on Friday. Second on the table, Bengaluru FC have the chance to go atop the table in a game week where fellow contenders ATK and FC Goa lock horns with each other. The hosts, meanwhile, will be keen to make ground and get closer to the final playoff spot as the regular season reaches its home stretch.

Mumbai City FC haven’t exactly been happy campers at home, winning only once at the Mumbai Football Arena this season. And while the statistic looks encouraging for Bengaluru FC, Cuadrat said his side wouldn’t be drawing any confidence from it. “While we are aware that their form at home isn’t very good, we also know how soon things can turn around in this League. We’ve seen it happen so often and we know better now.”

Cuadrat also stressed the need for his side to be the team that scores first on the night. “Mumbai City has been a team that has made things difficult for us in the past. Their vision is to be a counter-attacking side that doesn’t want too much possession of the ball, so we have to be the first team that scores. We will need to put our chances away.”

Mumbai City FC edged out Bengaluru FC at the death in a five-goal thriller at the Kanteerava a month ago, in a 3-2 result for Jorge Costa’s men, and given how much is at stake for both sides, Friday could serve another enthralling duel.

The Blues will be buoyed by the presence of striker Deshorn Brown, who landed in Bengaluru on Tuesday and has made the trip to Mumbai. “Deshorn has played his last competitive game a month ago, but is looking fit. He’s put in a couple of sessions and has travelled with the team to Mumbai,” informed Cuadrat.

Both teams have had contrasting starts to January. While Bengaluru FC saw out an in-form FC Goa side in an engaging game, before quelling any fight from Jamshedpur FC, Mumbai City FC have suffered successive defeats against top-four contenders ATK and Odisha FC. Jorge Costa will also be worried about the five-point gap that Odisha opened over his side after their win over Hyderabad FC on Wednesday.

Skipper Sunil Chhetri has been in cracking form with eight goals this season, and could only benefit more with the arrival of Brown. His brace sunk FC Goa and his finish against Jamshedpur FC guaranteed all points after Erik Paartalu had put the Blues ahead early in the game. And Chhetri will hope his rich vein of form in front of goal continues at a Stadium where the Blues lifted the ISL trophy last season.

The hosts have been pegged back with an injury to influential midfielder Paulo Machado who is all but ruled out for the season, and Costa will expect his attack – laden with foreigners – to turn up in the crucial fixture.

The game kicks off at 7.30pm on Friday and will be telecast on the Star Sports Network and Hotstar.