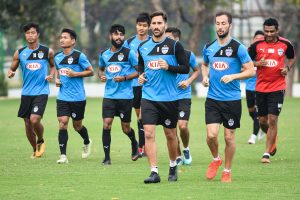 Bengaluru FC head coach Carles Cuadrat has hinted that he will give some of the younger members of his squad a run out when his side takes on Jamshedpur FC at the JRD Tata Sports Complex in Jamshedpur on Wednesday. The Blues, having already qualified in top spot following a 3-0 win over FC Goa last week, will look to rest several key players, in a bid to keep them fresh for the play-offs, set to kick-off in the second week of March.

“We are in a privileged situation because we have qualified for the play-offs already. I spoke to my staff earlier and decided that it was a chance to reward some of the players for their hard-work through the season. There are a few members of the BFC B team who have been with us for many months now and I want to make this game an opportunity for them to wear the BFC shirt and play a competitive game for the first team,” Cuadrat said to the press on the eve of the clash.

Jamshedpur FC’s draw to Chennaiyin FC on Saturday sent them out of the reckoning for a play-off spot, with NorthEast United holding an unassailable four-point lead heading into the final round of games. But Cuadrat believes that the Cesar Ferrando-coached side are heading in the right direction.

“You can see that Jamshedpur is one of the teams that has played some of the best football this season. When they came to Bengaluru, it was a difficult game. We managed a draw, but in some moments during the game, they had a lot of possession and put us in a tough spot,” Cuadrat added.

While Bengaluru got back to winning ways with a convincing 3-0 victory over FC Goa on Thursday, Ferrando’s side have managed just one win in their last five League games, a 1-0 result over Mumbai City FC.

The game kicks off at 7.30pm and will be telecast live on the Star Sports Network, HotStar, JioTV and Colors Kannada TV.