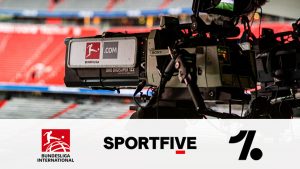 Bundesliga International, a subsidiary of the DFL Deutsche Fußball Liga, digital media company OneFootball and SPORTFIVE collectively launch an innovative broadcasting model for all Bundesliga and Bundesliga 2 matches in Brazil.

Beginning with the upcoming 2020-21 season, which kicks off on September 18, all Bundesliga and Bundesliga 2 games will be broadcasted for free in Brazil exclusively via the OneFootball app – for the next three seasons, up to and including the 2022-23 season.

In addition, OneFootball will also broadcast the German Supercup, which this year features FC Bayern München and Borussia Dortmund, as well as the all-important promotion/relegation matches at the end of each season. After discussions on how best to engage the Brazilian audience, SPORTFIVE, as a global sports business agency and comprehensive broadcasting rights partner of Bundesliga International, created the overall framework for this distribution partnership. Furthermore, SPORTFIVE and OneFootball jointly oversee the marketing of all advertising inventory.

In addition to this agreement, the DFL retains the option to make one match available to a linear broadcaster in Brazil each Matchday.