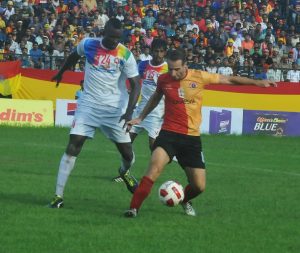 It was the expected tough encounter for the red and gold under heavy underground conditions with rains having made the East Bengal grouns lushy and difficult to play.

A 25th minute pull on Surabuddin Mallick earned East Bengal a controvertial penalty which Lalramchullova banged into the goal past former East Bengal keeper Dibyendu Sarkar’s hands for the only goal of the match.

It remained a difficult encounter for East Bengal as Rainbow AC had some good opportunities to equalise but keeper Rakshit Dagar had a great game saving his side on numerous occasions, while East Bengal also wasted their chances.

East Bengal moved back to the top of the CFL table with 16 points from six matches.