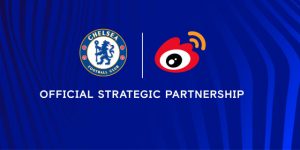 Chelsea Football Club is enhancing its presence in China by becoming the first Premier League side to agree a strategic partnership with leading Chinese social media platform Weibo.

As part of the partnership, Chelsea FC will utilise the Weibo platform to deliver new and exclusive original content for Blues fans in China. As an innovative, digital-first club, Chelsea will provide unique content on a daily basis to our millions of fans in China.

Chelsea chief executive Guy Laurence said, “Delivering high quality, quick-to-market content and bringing our Chinese fans closer to the club are two key aims of Chelsea’s China strategy. Through this strategic partnership with Weibo, we will be able to grow our offering of original and China-specific content across the country.”

“Chelsea is an innovative and digital-first club which is always looking at new ways to bridge the gap with our Chinese fans and reach out to new ones. Last season Chelsea was the fastest growing football club on social media in China, and this season we will continue to grow, and we’re confident this partnership with Weibo will help support this mission.”

Added Zhan Sheng, general manager, Sina Sports, said. “It gives me great honour to lead Weibo in building up a close strategic cooperation with Chelsea Football Club, one of the most prestigious clubs in the English Premier League.”

“Having already successfully worked with Chelsea on a number of projects, Weibo and Chelsea will continue to collaborate further. The key areas of our focus moving forward will be on delivering bespoke multimedia content formats, operating fan communities, as well as new and upgraded commercialisation models.”

“Weibo has continued to increase its investment and support in the sports industry since the inception of its vertical sports operation. With an increased impact in the sports industry in recent years, Weibo has now formed a comprehensive ecosystem linking event organisations, clubs, athletes, media, and key opinion leaders. It’s a unique style of social media communication on Weibo which will provide Chelsea with the platform to increase fan participation and commercial monetisation.”

China is a priority international market for Chelsea and they are the first European football club to produce a local pre-match studio show in the country, specifically for Chinese fans. The pre-match show, now in its second series, has been available to watch on Weibo.

Chelsea currently has over eight million followers on Weibo, and last season, they were the fastest-growing European football club on Weibo in China.