Chennai City FC look to get back to winning ways against bottom-placed Shillong Lajong FC!

Arunava Chaudhuri 2018-12-28 I-League Comments Off on Chennai City FC look to get back to winning ways against bottom-placed Shillong Lajong FC! 373 Views 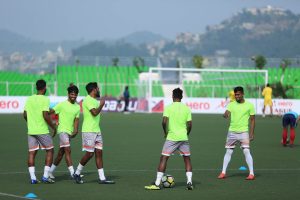 Chennai City FC, whose lead at the top of the 12th I-League table looks threatened with every passing game, will look to get back to winning ways at home against bottom-placed Shillong Lajong FC on Saturday, December 29. The game at Coimbatore’s Nehru Stadium begins at 5pm IST.

The home side has lost points in each of their last two games and suffered their first defeat of the season against Real Kashmir FC in the previous game. That has given the chasing pack of about five clubs hope and Singaporean coach Akbar Nawas will want to ensure a confident three points on Saturday to get their campaign back on track.

For Alison Kharsyntiew’s Shillong Lajong FC, it has been a bitter-sweet campaign. Their tally of seven losses from nine games does not really reflect the attractive brand of football that Shillong Lajong FC’s attacking line has been dishing out.

The coach was forthright in the pre-game presser confiding, “Chennai City is a very good team and they are top of the table. They have been playing very good football, so it is going to be difficult for us to defeat them at their home.”

He added, “Our players have to put full effort and will be playing with full confidence against them. Yes, we have been lacking on our defence.”

It looks to be an uphill task on paper for the visitors with the coach disclosing that Rakesh Pradhan, one of the bright spots of their campaign this year, will be missing out due to injury.

For the hosts, their Spanish striker Pedro Manzi will have to get back to goal-scoring form, else coach Nawas already has Serbian Josef Kaplan as cover. Also, his dynamic Spanish midfield duo of Nestor Jesus and Sandro Rodriguez will have to be on top of their game once again after having a couple of off days in between.

Akbar Nawas said in the pre-game chat, “We will be playing our usual game tomorrow, but we hope the referee will be fair with us. We are not asking the referee to favour us. He should be fair to the game.”

Shillong Lajong FC will look for inspiration from their captain Samuel Lalmuanpia and will hope that Phrangki Buam adds to his tally of three goals in the league so far, for them to get a positive result.

@Arunfoot
Previous UEFA and FIFPro condemn racist abuse in Italy’s Serie A!
Next XtraTime VIDEO: East Bengal have to be content with a point against Real Kashmir FC!