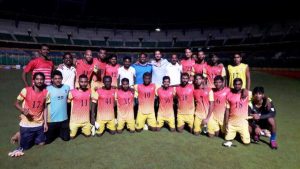 For the first time since the inception of the I-League, Chennai will be having a team of its own in the forthcoming 10th edition in Chennai City FC. The debutants have already roped in quite a few National Team players akin to Karanjit Singh and Dhanpal Ganesh, while they will be led by Dharmaraj Ravanan.

The club is led by the visionary Rohit Ramesh who took over the then 67-year old Nethaji Sports Club in 2013, and within three years they’re only days away from their I-League debut- a fairy tale in the making. In an exclusive interview with I-League Media, Rohit spoke at length about the vision, the path ahead, the local talent and much more.

What prompted you to take up the Nethaji Sports Club three years back?

The dream was to own a football club, especially from Chennai. The timing was right and the Late T.R. Govindarajan founder of Nethaji was kind enough to pay a heed to my vision and give me the platform to guide the club. Considering Nethaji was a club formed in 1946, my vision was to take over the history of the club to the betterment and have a long lasting future. I owe my regards to the Late T.R. Govindarajan who’s still our patron of the club.

How would you plan to contribute to the recent upsurge of the city’s football enthusiasm?

We will try to do our best to put a competitive squad. We have a local connect with the fans who follow us during our city league. We will ensure that we do our best to upsurge local talent.

On the 70th year of existence, the club is going to make its national debut. Wasn’t the phase a bit longer one?

Once again it’s the timing. I still feel time plays a crucial role. We look into seeking this opportunity for the entire state of Tamil Nadu.

How are you confident about competing against the big guns of Indian Football?

It’s going to be a hell of a task. We will learn from them and slowly make progress in the future. Our respect is huge to all clubs and we will make a good progress working with them and learning from them.

Every club has a fairy tale! I prefer to have our own. With limited time constraints, we will look into fielding a good squad to compete.

Where are you going to tap in to bring more crowd on your home matches?

Chennai crowd haven’t witnessed the best of the National Level of Football till date. What will be your message to them before the I-league starts?

The message is simple. Tamil Nadu players have a platform now to propel in the national stage. As a club, it’s my duty to ensure that. Once more and more local players rise up from our ranks, I’m sure the crowd will be right behind us. This is a new start for entire Tamil Nadu.