Chennaiyin FC B hand away 3-0 lead in 3-3 draw with South United FC! 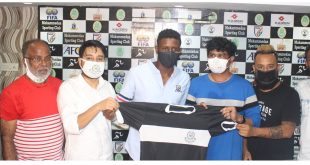 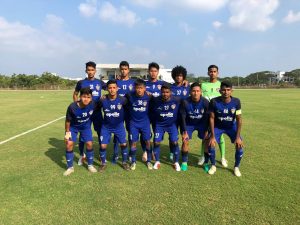 Chennaiyin FC B drew 3-3 with Bengaluru’s South United FC in their first home game of the Second Division League at the SSN College Ground today. Mizo striker Bawlte Rohmingthanga scored a quick-fire brace for Chennaiyin FC in the first half after Krishna Pandit had given them the lead. South United FC however fought back and equalized in the closing stages, with Cletus Paul scoring a double for the visitors.

Chennaiyin FC B made five changes to the side that played out a goalless draw against Kerala Blasters Reserves in their previous game. The injured Saurabh Meher was replaced by Mohammed Sarif Khan in defence with Ajin Tom coming in for Hendry Antonay at right back. Joysana Singh started on the left flank instead of Bedashwor Singh while new boys Kyntiewshaphrang Kharlukhi and Krishna Pandit made their first start for Chennaiyin FC B in place of Zonunmawia and Syed Suhail Pasha.

Chennaiyin FC B enjoyed more of the possession in the opening stages and took the lead in the eleventh minute. The ball fell to Rohmingthanga fortuitously inside the box, who laid it up for strike partner Krishna Pandit, who fired a snap-shot into the back of the net.

1-0 became 3-0 in no time, as Rohmingthanga scored a brace in as many minutes. His first came from a header into the top corner from a delightful Joysana cross from the left. There was no respite for South United FC as a minute later Krishna was brought down in the box and the referee pointed to the spot. Rohmingthanga stepped up and fired the penalty low to the keeper’s left to make it 3-0.

Six minutes later, South United FC pulled one back through Sudipta Malakar, who turned in a cut-back from the right flank. The team from Bengaluru continued to attack as the first half progressed, but Chennaiyin FC defended resolutely and went into the break with a 3-1 lead.

Chennaiyin FC made two changes at the start of the second period, with Bedashwor Singh and Joseph Lalsanglura replacing Joysana and Surya Tirkey. Bedashwor almost made an instant impact with a mazy run from the left flank which saw him beat four opponents. His final shot however was blocked out.

South United FC then made it 2-3 with almost a quarter of the game to go, with Cletus Paul converting from the spot after Aaron D’Costa was brought down in the box. The visitors continued to dominate proceedings, but Chennaiyin FC posed a threat on the counter attack. From one such break, Bedashwor had a big chance to score Chennaiyin FC’s fourth. After receiving the ball in the middle of the box, the Manipuri winger skipped past two defenders but shot straight at the keeper. A couple of minutes later, South United FC were reduced to ten men after Amit Tudu was sent off for a second bookable offence.

South United FC continued to attack and scored the equalizer in the last minute of regulation time, with Cletus Paul again the scorer.

Chennaiyin FC B take on another team from Bengaluru in the form of Ozone FC in their next Second Division League fixture on Tuesday, January 22 at the SSN College Ground at 3:30pm.

Mohammedan Sporting are set to announce their first foreign recruit on Tuesday morning. As per …