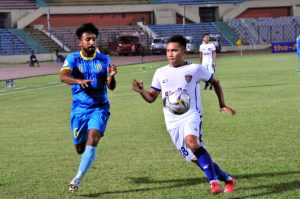 Chennaiyin FC made a bright start as Renthlei made a surging run down the right in the fourth minute, combining with Francis who was making his first AFC Cup appearance for Chennaiyin FC. Dinliana got into a promising position but could find only the Abahani Limited Dhaka keeper with his cross.

Chennaiyin FC did convert their dominance into the opening goal in the sixth minute. Isaac’s corner kick found Vineeth unmarked at the far post, the Kerala-born striker tapping it in for his first AFC Cup goal of the season, and his fifth overall in the competition.

Chennaiyin FC continued to press Abahani Limited Dhaka on all quarters of the pitch. Eli Sabia had a goal disallowed shortly after when he turned in Vineeth’s flick-on from another Isaac set-piece.

Abahani Limited Dhaka worked Karanjit for the first time in the 20th minute. Sunday Chizoba’s flick-on to Belfort found the latter in space. The Haitian striker’s low drive was turned wide by Karanjit for a corner.

With the half-hour mark approaching, Abahani Limited Dhaka enjoyed a spell of sustained possession. From a set-piece, Sunday tested Karanjit with a header from close range. The keeper was in the right place at the right time to hold on to the ball.

Sunday then missed a gilt-edged chance to put his side level. The Nigerian striker’s pass for Belfort came back to him courtesy a Chennaiyin FC block. Sunday couldn’t keep his composure as he blasted his shot over the bar from close range.

Having led by the solitary goal at the break, Chennaiyin FC were quick off the blocks in the second period. Anirudh Thapa was the orchestrator in midfield as he laid up Isaac at the edge of the box on the break. Isaac took a touch before curling it past the Abahani Limited Dhaka keeper, only for the shot to strike the crossbar and go over.

Ten minutes into the second half, the game became more end-to-end. Isaac had moved into a more central role with Thapa taking up his position on the left.

At the other end, Abahani Limited Dhaka continued to get into promising positions. And in the 65th minute, they did find a way past the Chennaiyin FC backline and Karanjit. A long ball found Belfort in space, who pulled away from Mailson before placing it out of Karanjit’s reach to make it 1-1. It was the first goal conceded by Chennaiyin FC in their debut AFC Cup campaign in their sixth outing, including the qualifying play-off round.

Abahani Limited Dhaka then went 2-1 up after five minutes, through Masih Saighani’s well-taken free kick from the right. The Afghan defender curled it past Karanjit’s reach, his effort going in off the crossbar.

In response, Chennaiyin FC made their first change of the evening as Thoi Singh replaced Francisco.

And the Manipuri winger made an instant impact as he ran on to Mailson Alves’ slightly overhit pass, creating confusion in the Abahani Limited Dhaka box. Thoi managed to keep his feet before squaring it to Isaac, who kept his calm and slid it in to make it 2-2. A frantic ten minutes seeing three goals scored, with Isaac scoring his first AFC Cup goal of the campaign akin to Vineeth.

Karanjit then made a brilliant save in the 84th minute to keep the scores level. The Chennaiyin FC custodian showing great reflexes to keep out Belfort’s glancing header from close range.

Abahani Limited Dhaka were a threat from long throws all evening. And it was from one such chance they went 3-2 up. The second ball fell to Mamunul Islam, whose half-volley flew into the top corner.

After a four-week break, Chennaiyin FC will take on Minerva Punjab FC in Guwahati in their penultimate AFC Cup group game on Wednesday, June 19.

Previous Macarthur FC it set to be Australian A-League expansion franchise!
Next XtraTime VIDEO: Could Lalramchullova be leaving East Bengal?