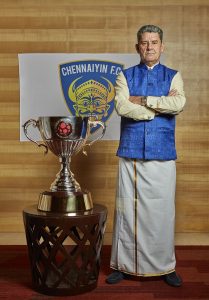 Chennaiyin FC Head Coach John Gregory was bestowed with the Association of Indian Football Coaches (AIFC) ISL Coach of the Year award at AIFC’s inaugural awards on Tuesday evening at the D.Y. Patil School of Medicine in Navi Mumbai. Gregory was recognized for his achievement of guiding Chennaiyin FC to their second ISL title in March this year, in what is his first ever coaching stint in India.

Formed in December 2017, the Association of Indian Football Coaches (AIFC) is the premier association for coaches in India and is recognized by the All India Football Federation (AIFF). Its aim is to advance and improve football coaching through education, exchange of ideas and welfare of coaches in India.

“This award belongs to the entire coaching staff, management and everyone else associated with Chennaiyin FC for the fantastic last season. I am excited to return to India in a few weeks and begin the new campaign as champions and defend our ISL title. The support of a body like AIFC is extremely important for the entire fraternity of coaches. From all of us at Chennaiyin FC, we would be glad to help the aspiring coaches out there in their endeavours. They are most welcome at our club!” Gregory said on receiving the award through a video message from London, as he couldn’t be present for the event.

Under Gregory, Chennaiyin FC won their second ISL title on March 17 2018 by beating hosts Bengaluru FC 3-2 in the final and finished the campaign with an eight-game unbeaten run. That victory also ensured Gregory’s CFC side a place in the 2019 AFC Cup.

The 64-year-old Englishman has already been retained by the two-time ISL champions as he signed a one-year extension back in March.