Press Release 2020-02-18 I-League Comments Off on Churchill Brothers & Real Kashmir FC face off with third place on the line! 259 Views 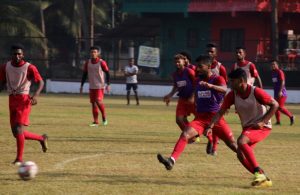 Churchill Brothers will be taking on Real Kashmir FC in the I-League 2019-20 at the Fatorda Stadium in Margao, Goa on Wednesday, February 19. The match is slated for an evening kick-off at 5pm and will be broadcast LIVE on 1Sports, with online streaming available on the Fancode app and website.

Churchill Brothers are currently placed fifth on the I-League table with sixteen points, while Real Kashmir FC are a point behind in seventh position. A win for either side will see them rise to third place on the standings.

A stoppage-time victory over Aizawl has served as a huge boost in morale for Churchill Brothers, in stark contrast to their preceding outing against Chennai City FC where the two-time I-League champions were on the receiving end of a stoppage-time knockout at the hands of the reigning kingpins. This has been the story of Churchill Brothers’ season, with inconsistency costing them gravely on occasions.

“The team has been playing well, with good offensive football where we have managed to create many goal-scoring opportunities but unfortunately, we have also squandered a lot of chances and then the opponents have capitalised and gone on to score. This has been the story of our last few games,” said Churchill Brothers head coach Bernardo Tavares.

Weighing in on their dramatic win against Aizawl FC, he added, “Versus Aizawl, we could have gone to the break with a two-three goal lead because we had clear chances, but unfortunately we didn’t take them.”

“We ended up allowing the opponent to claw their way back, but fortunately, the team believed that it was still possible to score another goal and we managed to score in the last minute of stoppage time. It was a victory that brought us some relief.”

Real Kashmir FC, on the other hand, were on course to weave a victorious streak but their three-game winning run came to a screeching halt against fellow-title hopefuls Punjab FC, with the home side winning 1-0 in Ludhiana.

Commenting on whether the defeat has deflated their role in the title-race, Real Kashmir FC head coach David Robertson said, “It will be tough for any team to catch Mohun Bagan but we always take each game as it comes and never look beyond the next game. There’s still a lot to play for in this league. Our priority right now, as I said before, is the next 90 minutes which is against Churchill Brothers.”