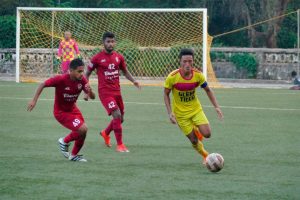 Uttam Rai scored a brace for the winning side but the Red Machines had four other scorers too in Vinil Poojary, Cyrus Noronha, Nickson Castanha and Gilbert Oliveira. Cho Lepcha pulled a goal back for the Bardez side.

For Chuchill Brothers, the win came at a cost of two players as the Varca-based side saw two of its players being sent off for rough play. While goalscorer Nickson Castanha saw direct red for his deliberate handball in the 82nd minute, Valerio Rodrgiues was sent off for his second yellow in the second half added time.

Churchill Brothers sprung into action in the third minute when Uttam Rai, on receiving a pass from Poojari, guided the ball past the rival keeper, 1-0.

Bardez FC took time to settle in the game and Churchill Brother SC doubled the account at the half-hour mark through Vinil Poojari, who saw the keeper out of the goal and hit straight at the goal to make it 2-0.

The third and the fourth were scored in span of two minutes just before the breather. Cyrus Noronha showed his composure in front of the goal as he dribbled past couple of rival defenders with ease and rounded off the keeper to make it 3-0 and Uttam scored the fourth heading in Vinil’s cross. The Red Machines led 4-0 at the break.

Crossing over, Nickson Castanha scored the fifth in the 54th minute and Gilbert Olivera netted the sixth in the 78th minute when his shot deflected off the rival defender before entering the net. In the 84th minute, Nickson saw red when he tried to stop the ball from entering the nets. Referee Tejas Nagvekar made no hesitation to show him the red and also awarded FC Bardez a penalty kick. Cho Lepcha stepped over and coolly converted the spot kick to score a consolation. In the dying minutes, Valerio became the second player to be expelled following his second bookings.